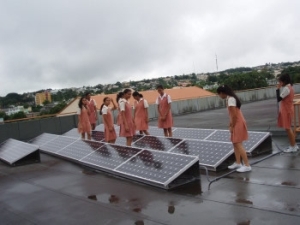 Many campaigns have and are being organized by the public and private sector to further sensitize more and more people.

Mauritius is a relatively prosperous country whose Prime Minister has committed to becoming a sustainable island.

Maurice Ile Durable was first announced by the Prime Minister as a long term vision aimed at promoting sustainable development.

The main objectives of the project Maurice Ile Durable is to make Mauritius less dependant on fossil fuel, with a target of 65% autonomy by the year 2028 through increased utilization of renewable energy and more efficient use of energy in general.

In June 2008 the MID Fund was set up by regulations under the Finance and Audit Act, as a specialized Fund.

In parallel to sensitisation about climate change, there are concrete measures which are being brought forward.

One of them is the use of solar photovoltaic panels as a source of alternative energy also in the government programme and MID Fund.

On a pilot project some two hundreds (200) applications are being offered for those who wish to implement the Solar PV system in their homes. The cost for a 2.3 KW system is MUR 430000 inclusive of VAT installation and commissioning.

In the context of Maurice Ile Durable (MID), the Managing Committee of the Hindu Girls’ College is an example for deciding to invest in a photovoltaic system in order to make use of renewable energy (solar energy) to power some of the College’s facilities.

On 17 December 2010, 17 photovoltaic panels with a total capacity of 3KWP were installed on the roof of Block D of the Hindu Girls’ College and made history by becoming the first Educational Institution to use solar energy to produce electricity.

Since that day 1398 6 KW have been produced, averaging 12.7 KW per day. This has not only helped to reduce the college’s electricity bill but has contributed to decreasing the carbon footprint of the College as the generation of electricity from solar energy is ‘clean’ with no Carbon dioxide emissions.

Hopefully like the Hindu Girls College, many others will go towards sustainable energy source.