The topic of this week’s leadership training on Education for Sustainable Development places more emphasis on leadership which is an important aspect for the group to deal with as they are to become leaders in the ESD field. The Facilitators for this week are brand new to the training as the group welcomed Michael Zillich and Ilka Stein of Denkmodell (one of three organizations which make up the consortium for the training). Michael started off by taking the group through the schedule for the day, the week ahead and through the learning objectives for the sessions.

The introduction to the topic of leadership was given by Ilka who firstly provided the participants with a task. In this task photographs were spread along the floor and each participant had to choose one and discuss in small groups why they chose it and what aspects of leadership they felt it shows. This was then discussed amongst the entire group whilst Ilka drew up a mind map of all the ideas. This then lead onto a discussion on the triangle of leadership.

The review of the previous week was slightly later than usual which just meant the participants were all the more awake to take part in the crossword that had been prepared for them. Agnieszka, Britta and Thea had set this up and split the group into two teams. They then gave various clues of what had been talked of in last weeks session and as it happened one group won by a clear margin. Thea then read out the official summary of the weeks work.

After the review the facilitators continued on with the new topic and brought in the important question ‘can leadership be learnt?’ Michael showed the group a video by comedian Eddie Izzard about leadership and he then went on to asked questions such as the difference between leadership and management (another important question which had been raised all day long). The trainers than tried to find out which direction the group was leaning in relation to whether leadership is something you can learn or whether it is simply something you are born with. Therefore the participants were split into three groups, yes, no and in the middle. They discussed the issues and picked a leader to take part in the ‘fish bowl’ exercise (with Michael facilitating the fish bowl) where a lot of different and interesting issues were brought up and discussed. 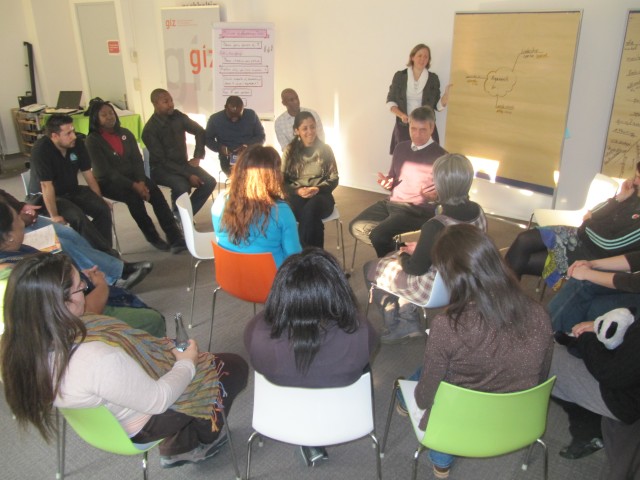 Participants during the fish bowl exercise

The last task for the participants required them to read a case study of ‘the typical day of a manager’ and to answer three questions on this passage. This included their managers personal characteristics, his tasks and the indicators of his leadership style. Each group then presented their conclusions to the rest of the group and placed these on a pin board as these will be discussed further tomorrow.

Before wrapping up for the day the participants engaged in a quick round of feedback which showed that while the group were happy about what had been achieved today, they were eager to see what lays ahead for them in training tomorrow. This included Deepika who when asked what she is expecting of tomorrows lessons, replied with “Lets see what you have to offer”. And so they will see what is on offer tomorrow morning when the training picks up where they left off.