When the participants entered the familiar surroundings of Stratum Lounge today they did so to the unfamiliar sight of a video camera being set up in the corner of the room. This had been set up to allow the participants to begin recording their ESD video. The starting point of this was to have all them say the word ‘change’ into the camera a number of times in order to get the best recording possible. I have to admit, when it was my turn to speak towards the camera the word change was starting to sound very strange.  After the whole group had the chance to do this, some members of the group were required to read out their prepared statements (which they prepared weeks previously)  in front of the camera.  This was about trying to narrow down the complex issue of ESD into one sentence in their own words. It also gave them the chance to say what they wanted to about the concept. 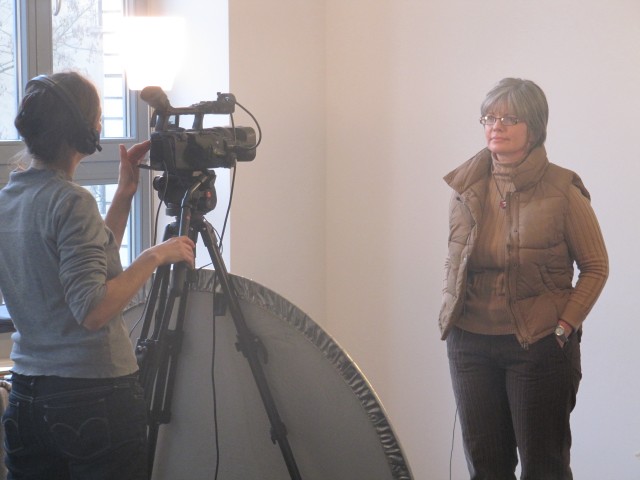 Once this was complete the group were split in two. One half would escape outside into the cold weather in order to record any thing that could represent changes and anything that would help visual change.  The second group would  pick cards which had key words regarding ESD written on them and work on what they wished to say about these words. Once they had written what they wished, they spoke it into an audio recorder.

After lunch and after the camera had been finished with for the day, the participants were given a lecture by Holger Mühlbach who works within multiplier programmes who discussed the issue of teacher training for ESD and gave the participants a couple of handouts in the form of a book and leaflet. Eventually the group applauded the arrival of Birgit Brenner from ALU. If you have been reading the blog updates for the ESD leadership training you will know that the group had met Birget once before in Mecklenburg during week one of the training. The participants had been looking forward to seeing her again and they were treated to an input  based around different approaches to teaching Esd and working with pupils. After both these inputs the group were given the chance to ask questions on what had been discussed.

As stated in yesterdays blog entry, the group will meet tomorrow morning (Friday 18th) at 8:50 at Hermanstraße.