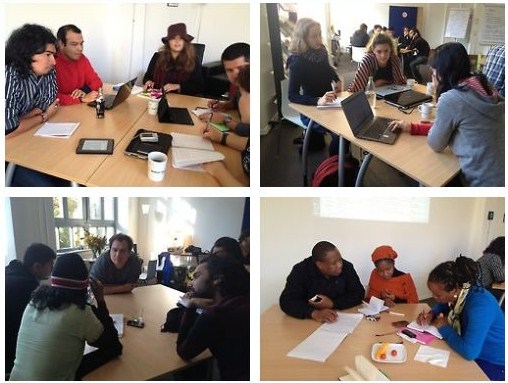 As part of their time here on the course, participants will have the chance to plan ‚National Workshops‚ together. These will take the form of an event, held in their home countries, that will allow them to show what they have learnt during their time away, as well as present their ‚Innovation Projects‘ to their employers, stakeholders and the general public. This morning saw the first official meetings of these country groups, essential as they will all have to work together to create a single, country specific event.

This continued into ‚Introductions to National Formal Educational Systems.‘ Countries spoke in groups about how education was organised back home, giving everyone a chance to understand each others backgrounds, and the circumstances within which the educators are working. Discussions included the cost of education to families, funding, the status of teachers, the social reasons behind going to school, and the varying access to university level education.

The day continued with an introduction to the ‚Cultural Project.‚ This will be a mix of music, documentary, interview and animation to create both a message to pass on to others about sustainability, but also a reminder of the participants‘ time here, something they can bring back home and enjoy. The group can decide what direction to take this in, be it a serious drama, a humorous look at the issues or a thought provoking piece about the future of sustainability and the environment.

Colourful Ideas before they are put on display

After watching last years music video, the groups decided on the tonality they wanted for their project. Suggestions included humour, metaphorical, questioning, culturally identifiable, relatable & with a positive narration.
Next they discussed the messages they wanted to convey with their video. They came up with ‚Everything is connected‘, ‚Domino Effect‘ & ‚Water Wise, Earth Wise, Resource Wise, Be Wise,‘ amongst many others!

Participants share what ESD means to them, through the art of mime

In the late afternoon, Agnieszka arrived, a participant from last year’s group. She came armed with initiation exercises for the group! Along with miming thoughts about ESD for the mentors to guess, the groups were running through the streets of Berlin to take photos of ESD in action and swapping an item as many times as we can with strangers in the street.

A long Wednesday, but the group gained a lot from it. A welcome dinner will close the day in a restaurant close to the Stratum Lounge.