A Public Lecture by the Institute of Advanced Sustainability Studies

On the 15th of December 2012 the Institute of Advanced Sustainability Studies (IASS) in Potsdam held a public lecture on the Latin American Perspectives on the Sustainable Development Goals (SDGs). Present speakers were Dr. Isabel Cavelier (Ministry of Foreign Affairs, Colombia), Ana Bozena Sabogal (Ministry of the Environment, Peru) and Luis Rios (Ministry of Natural Resources and the Environment, Guatemala).

The event started with a brief introduction to the topic by Prof. Dr. Klaus Töpfer, the executive director of the IASS. This was followed by a 20 minutes presentation by each of the three lecturers on the SDGs in a Latin American context. Ultimately, there was time for questions and discussions.

In his opening speech, Prof. Dr. Klaus Töpfer set out the general context of sustainability and the SDGs. In this respect, four main international conferences can be regarded as milestones in placing sustainability on the global agenda. The first one was the United Nations Conference on Environment and Development in Rio in 1992 (also known as Rio Summit or Earth Summit), which resulted in the establishment of the Climate Change Convention and the Kyoto Protocol. The second milestone corresponds to both the Millennium Summit in New York in 2000 as well as the World Summit in New York in 2005, where the Millennium Declaration for the Millennium Development Goals (MDGs) was established. The MDGs consist of eight global development goals which are to be achieved by 2015. As third key event, the World Summit on Sustainable Development (also known as Earth Summit 2002) in Johannesburg in 2002 can be pointed out, which resulted in the Johannesburg Declaration on Sustainable Development. Finally, the fourth essential conference was the United Nations Conference on Sustainable Development (also known as Rio+20 or Earth Summit 2012). One outcome of this summit were the Sustainable Development Goals (SDGs), which consist of a set of measurable targets aimed at promoting sustainable development globally. As Prof. Dr. Töpfer has been actively involved in the creation of MDG 7 (Ensure Environmental Sustainability), he stressed the importance of sustainability and pointed out that “sustainability should have been more integrated in the MDGs”.

The presentation by Dr. Isabel Cavelier in turn provided extensive insights into the development of the SDGs. First of all, she emphasized that the SDGs should be regarded as a call to action in the field of sustainability, being a combination of a pull- and a push-approach as well as a bottom-up and top-down initiative. The initial development of the SDGs originated from Latin America: A first proposal was drafted in Colombia in January 2011, being followed by a second, third and fourth proposal initiated by Guatemala, Peru and the Arab Emirates respectively. Isabel pointed out that poverty alleviation should remain a central goal of international development efforts, but that this emphasis should be complemented by a focus on Sustainable Consumption and Production (SCP) in addition to a new concept on prosperity. The following emerging priority areas have been highlighted: 1) food security, 2) integrated water management, 3) energy, 4) sustainable and resilient cities, 5) oceans, 6) SCP patterns, 7) life security, 8) human health and 9) education for productive livelihoods. Moreover, 1) equity and 2) gender have been identified as cross-cutting issues. The principles of the SDGs have been defined as: 1) reducing inequality, 2) promoting human resources and 3) ensuring sustainability. These three dimensions should thus be integrated into each of the targets of each priority area. Consequently, according to Isabel, “a more structured, systematic and integrated approach than the MDGs is needed” and “the SDGs must be universally applicable in our globalized, interdependent world” while “delivering on voluntary, country-specific targets. 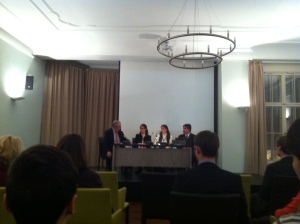 Whereas Isabel’s speech elaborated on the SDGs in general, the following two speeches applied the issue of sustainability and the related problems directly to specific Latin American countries, namely Peru and Guatemala. Aba Bozena Sabogal focused her presentation on the concrete environment of Peru. In this context, she emphasized the importance of establishing global goals which are locally implemented and therefore highlighted the following priority areas of the SDGs in Peru, being 1) equality, 2) water, 3) oceans and sea health, 4) health and ecosystems, 5) food security and 6) sustainable agriculture. In this regard, a joint combination of economic, environmental and social goals is essential. With respect to Peru, the main sustainability challenges, which have to be addressed, encompass deforestation of the Amazon, poverty in the Andes and in rural areas, water pollution, soil degradation, environmental deconstruction through mining, biodiversity loss, child mortality and diseases as well as conflict and illegal activities.

The final speech by Luis Rios applied the concept of the SDGs to the specific context of Guatemala. As small, but diverse country with numerous natural resources and a rich culture, Guatemala’s conditions are quite distinct. Main social vulnerabilities in this regard include insecurity, violence, social tension and drug trafficking, whereas the economic challenges consist of the country’s small economy and overall (agricultural) vulnerability, access problems, taxes, corruption and high risk of disasters. Finally, the environmental vulnerabilities encompass the deconstruction through increased consumption, climate change and deforestation. As important objectives, Luis stressed 1) transparency, 2) public participation, 3) green economies, 4) environmental management, 5) SCP, 6) parameters for management, evaluation, comparison and support. As the sustainability challenges diverge per region, it is thus vital, that the SDGs are tied directly to a country’s specific context.

Overall, the IASS event has once again highlighted the importance of sustainable development and has provided a profound understanding of the SDGs in general, as well as their diverging notions in a country-specific context.