Cooperation Management is the theme for Week 7, and will be taken by Birgit & Fabian, the trainers who accompanied the group to Benbi in Week 4. 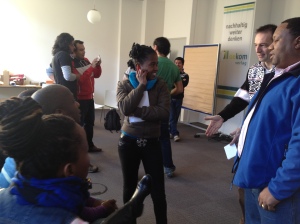 South Africa contemplate the relationships in their careers

As most new weeks begin, a review was done of the activities of last week, as much for the new trainers as for the participants. This turned into a cumulative review, with everyone passing round the opportunity to speak and share what had stayed with them, particularly the knowledge of each other’s countries that they had gained.

Birgit & Fabian introduced this week’s topic with an activity to wake everyone up on a Monday morning. The group were to arrange themselves into organised shapes according to;

In what sector do you work? Where are you from? How do you communicate with others in your work? Who did you last contact in Germany?

From this, the group were able to determine how their relationships in a professional capacity can be managed, often in a better way and to their advantage.

The expectations from this week of training were also explored, and how the participants would measure their success after their five days of work. Before lunch, Birgit took the group through the types of cooperation that can exist, including;

To reenergise the group, a game of Head & Tails was started, played by three teams. With various rule changes and the addition of coins as prizes, the game became much more competitive and strategy based.

Once the excitement died down, the group was able to analyse how they felt, concerning; the decisions they’d made, the other team’s performance and how communication had affected decisions.

They decided that trust was essential for cooperation and effective communication. Only after testing this trust can communication be optimum, and it must remain transparent. This active second half was much appreciated by the group, keeping them interested in the topic until it was time for German class…