by Antonia Tiedt and Tim Aeberli 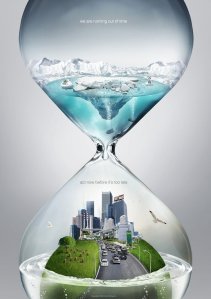 Without serious changes in economies, policy making and societies nearly all scientists predict unanimously a global warming of 4°C compared to preindustrial times. Many people believe that enough is already done to prevent climate change. As a recent World Bank report shows, what we are currently doing (in schemes such as the UN Nations Framework Convention on Climate Change, through emission pledges or commitments) is not enough. We have no other choice than to act immediately.

With early, cooperative and international actiona 4°C world can be avoided. Numerous studies show that we have the technical and economic possibilities to hold warming likely below 2°C (e.g. by using renewables, greening cities and switching to low-carbon agriculture). We do not have to give up the development paradigm, nor do we have to question economic growth. For now we only have to turn brown growth into green growth. The report emphasises that it is absolutely possible to prevent a 4°C world without going backwards in our development or hurting the economy much.

The problem with the geographical horizon

Most people (i.e. in the West) are more concerned about themselves than about the extinction of some animals they have never seen in real life. In their book “Nudge. Improving Decisions About Health, Wealth, and Happiness”, scientists Cass Sunstein and Richard Thaler found that most people are concerned about what threatens them directly and immediately. This is because they have some experience with such events. It makes sense, therefore, when people are more concerned about consuming organic foods, improving their local air quality or protecting local forest frogs than with the negative effects of their long-haul flights, land-use change in Amazonia or desertification in the Sahel zone of sub-Saharan Africa.

Global social inequality? Not when it comes to climate change

Everyone in the world will be affected.

It is important that the influential and powerful people know that. Climate change may hit poor people hardest, but also the rich will suffer when issues of starvation and thirst become more pressing (i.e. migration to Europe, war over resources). Extreme weather events will damage our support systems, and adaption measures to climate-change-induced events will only be effective if warming is kept below 2°C. A 4°C world will lead to significant harvest losses, leading to a reduction in economic growth in the agricultural and industrial sector in the poor regions and, most important, to hunger, thirst and possible starvation.Political and economic leaders need to be convinced that it also is in their interest to do something. Here are a few ideas why a “business-as-usual” approach is not the most clever thing to do:

–       political instability − conflict over resources, in poor countries as well as between the rich and the poor in affluent countries

–       higher risk of floods and droughts – high risk of contamination of drinking water, leading to an increase in diarrheal and respiratory              illnesses

It’s about being clever

So you probably think now:  “Well, thanks for the advice, but what can I do?”

A lot. If you are reading this article, then you are probably already familiar with solutions to climate change. And you know what has to be done. But if you want to do yourself and the people around you a favour you can start communicating your ideas to your friends and family. How about you convince them to switch to a renewable energy provider, and tell their friends to do the same? Or tell them that their money is more comfortable in a green bank then in a brown bank? For those of you who are social animals, why don’t you politicise the casual discussion with your friends, and for the shy ones among you: why don’t you sign that online petition that is waiting in your inbox?

Then think about this: We caused the problem. So who can solve it? Us!