Today’s training concentrated on Food Production with a Global Perspective..

The first half of the Halloween training day was conducted by Dr. H.P. Piorr, a Professor at the University for Sustainable Development & Applied Sciences. He was here to talk to the group about Soil Fertility & Hunger, a pressing issue for the world’s future. He began by reinforcing this point, reading facts about the urgency of the issue;

There is tension surrounding the demand in the developed world for top quality, pesticide free, organic food and adequate amounts for those struggling to find enough in the less developed countries.

Dr. Piorr, after introducing these conflicts, opened the floor to discussion and questions, which continued up until lunch time. Participants shared their ideas for improving the efficiency of food production e.g. separating the ties between food markets and the unpredictable stock market and mixing cultures grown together.
Soil Fertility, he revealed, is the key to improving and maintaining food production around the world. He covered the organisms found within soil, the importance of Nitrogen but also its harmful effects to humans, and gave a basic grounding in agriculture and nutrient cycles. 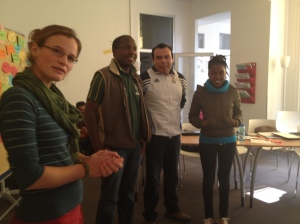 The participants separate themselves, showing those who don’t enjoy to cook

After lunch, Jessie & Johanna held a session on Organic Food in Germany, which more widely also encompassed nutrition, food production & sustainability.
It began with a game to gauge the group’s attitudes to food – Do they eat meat? Do they have a garden? Do they enjoy cooking? This quickly moved on to a movie demonstrating the intense production that takes place here in Europe, with the problems of profit maximisation and disregard, by the top food production companies, of quality and initial source being highlighted*

The group took part in a Silent Discussion, sharing their ideas on the ‚Consequences of today’s nutrition and food production‘ & ‚Sustainability and Nutrition.‘ This involved simply writing ideas on a workboard, without consulting others. These opinions were then discussed, with meat consumption being a contentious issue amongst many. Johanna & Jessie rounded up the session with prepared information on living organically and sustainably in Berlin; sharing where the bio stores are, the fair trade shops and even where you can go and freely pick fruit from community owned trees in Berlin**

To finish the day, Andreas gave the group a talk on the possibilities of anaerobic & aerobic digestion of waste food produce, and gave a practical demonstration of how composting can work in individual houses. He then showed a video recording of  Dennis Meadows, speaking about the Overshoot concept discussed yesterday, entitled ‘Limits to Growth.’

*The movie was called ‚We Feed the World‘ and is available on Youtube.
**Mundraub.org is the website detailing the locations of the trees.